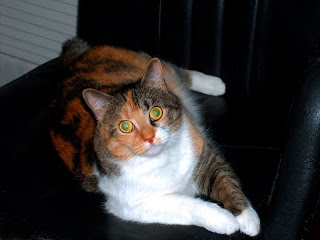 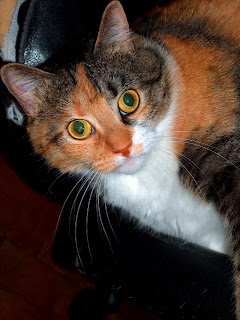 This is my little (well, she isn't little at all, but fat, fluffy and sassy) loving companion who happens to have four legs, paws and is awfully furry. Her name is Lulu. She's a quirky and lovable Calico girl who brings lots of laughs and joy to my world.

Hope you enjoy the pics. Chances are, this will be the final postings at The Henderson Files. Hope Lulu brings a smile your way.....
Posted by Patty G. Henderson at 3:34 PM 2 comments: 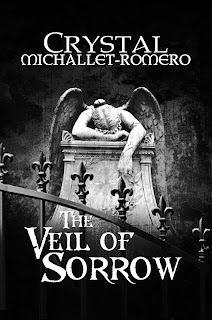 I was always a strange child growing up. When I watched the thrillers on Creature Features, I used to cheer for the monsters. I would shout with joy every time Godzilla stomped on a military jeep and whoop and holler with glee when the Creature from the Black Lagoon dragged off a scientist to the depths of the dark lagoon. To me, the monsters weren’t evil, they were simply misunderstood. They were innocent beings who, for no reason of their own, became the hideous monsters that we came to fear. According to Dr. Jay Stevenson, Ph.D., the differences between demons and monsters are that while demons are of the supernatural evil origin in opposition to God, monsters are man-made and are in direct conflict with the natural order. Following this criteria, Godzilla, werewolves, vampires, and Mr. Hyde are no different from Frankenstein’s monster. None of them asked to be created, nor did they cause their own creation. They were brought about by man and man’s technology. As such their actions are not their own but are manifestations of our conduct against our fellow man.

Once I understood this it became easier for me to understand my own obsession with vampires. I recognized that the characters in Anne Rice’s novels were portrayed as sympathetic creatures that were dragged into an existential crisis. Like the zombies from George Romero’s Land of the Dead, vampires were simply trying to find their place to exist in order to live an undead life in the only way that they knew how. Yes, so there was that itty bitty problem of having to survive on human blood, but was it their fault that the creator made them this way? At least that is how I see vampires.

Like many in contemporary society, I was engulfed in the post-modernist thought of turning away from the oppressive concepts brought about by authority in favor of viewing the outsider in a sympathetic light. They were the Others, the minority that exists on the fringe of society. I viewed these Others as not hideous creatures to be feared, but monsters to be understood. Indeed, they are monsters. They are the antithesis of all that was considered natural. Vampires are the undead, creatures who escaped the darkness of death to live an eternal existence. In all ways I see them as the Others, the ones who live on the fringe of society. For me, they’ve become the manifestation of everyone who lives on the edge of acceptance. Vampires are akin to all lesbians, gays, bisexuals and transgenders because like us, they are not accepted. Their existence puts into question decades of dogma, and they challenge all that we know to be sacred and profane. In this light, is it a wonder that I would have written a novel that favored the vampire character? The Veil of Sorrow, my first novel, turned out not only to be a final project for my Gothic Literature class, but also became a culmination of all of my years of favoring the monster. It is a novel that I hope will be entertaining as well as shed a sympathetic light upon vampires.

Posted by Patty G. Henderson at 6:54 AM No comments: 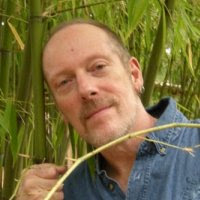 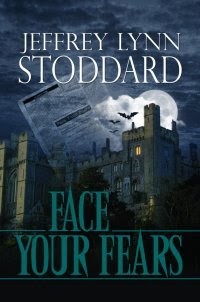 Isn’t it funny how life changes? Sometimes for the good, sometimes for the bad. In spite of it all, though, life never seems to lack entertainment value. As a kid, in my wildest dreams I would never have imagined myself waking up one morning and saying, “Hey, I’m gay. Let’s throw a party (and don’t forget to invite the Naval fleet).” But it happened… well, all but the Navy part (damn it). This, then, led to more discovery about myself. My likes, dislikes, attractions. Questions abounded. Why do I keep looking at guys when everybody is telling me that I am supposed to be looking at girls, and what is this funny feeling in the pit of my stomach? Am I a cat person? Am I a dog person? Am I afraid of ice cubes?

Through all these discoveries and advancements, one constant remained steadfast: my wild and vivid imagination. It was through this that I managed to cope with my days in grade/high school where I was mercilessly taunted and teased (and yes, threatened) daily for being the ‘queer’ boy. The funny thing was that those guys seemed to know of my leanings even before I did, which makes me now wonder what they were hiding about themselves. Incidentally, I suspect that these bullies are either long gone, now doing time in prison, or secretly cheating on their wives with guys in dark alleys. Under assumed names. Wearing ski masks.

Throughout my younger years, my imagination continued to expand in ways unexpected. First I found a proclivity toward composing and performing music. Jotting down plays and short stories came next, with the inevitable conclusion being the creation of novels. Writing had become, and continues to be, an escape. An adventure. Through this medium I am able to live the perfect life I can only dream of living. Only the best people (yes, the villains, too) are allowed to visit me in my delusional brain… well, there was that one guy I thought up who insisted that he was thinking me up. We parted ways quickly before either one of us made the other disappear.

The first manuscript of great length to make it out of my typewriter (remember typewriters?) was simply entitled “Billy”, so named after the lead character. Originally, Billy was straight, but sadly, the poor fool stuck around too long and found himself being dragged out of the closet, kicking and screaming. Oddly, his surprising metamorphosis just happened to coincide with my own coming out. I wonder if there’s any possible correlation? Nah. It was at that time that the entire story underwent a massive rewrite. Not only that, but having become so familiar with the cast and Billy’s sexual revolution (my own, ironically, stagnating before my eyes) the book was added to, years later being published as; Billy: A Gay Trilogy. It was at that moment that my path to writing gay novels exposed itself. Fortunately, there were no police around at the moment.

Meanwhile, back at my life, something else was happening. I had always been extremely interested in things that went bump in the night. This intrigue was really nurtured along by my really living in a couple of really haunted houses. Really! A single one of those stories would have you sleeping with all the lights on, and since I refuse to be held responsible for increased electricity bills I will keep my ghostly tales to myself. Anyway, the point of this is that it was only a matter of time before the subjects of gays and ghosts melded together, and once that happened there was an ethereal explosion of creativity. “The House on Capitol Hill” and “Face Your Fears” were my first ventures into this new and exciting realm. In such stories freedom is the key element, leaving me to bypass the restraints of reality, thereby allowing my mind to wander where it will. Hopefully it will return, some day. I do kind of miss it.

Our first author this month is Jeffrey Lynn Stoddard. Not only does he write some genuinely scary tales of hauntings, but he is an accomplished radio and podcast star as well. Come and share the day with Jeffrey. He will be here all day to answer your comments.

Crystal Michallet-Romero has written a gem of a vampire tale told in a unique voice. If you read one vampire book this year, check out THE VEIL OF SORROW. If you enjoy some of the classic vampire tales of the past, Crystal's book is a perfect blend to satisfy any blood cravings. Visit with Crystal and make sure you leave comments. Crystal will be happy to chat with you.
Posted by Patty G. Henderson at 5:30 PM No comments:

To Conference or not?

The lesfic community is a fairly small niche. How many conferences can lesbian writers and readers attend in a year? As a writer, do you feel that attending a conference will help your visibility, hence, your sales? Or do you find that meeting other authors and readers in a social atmosphere is what enriches and rejuvenates you as a writer?

I'm sure attending a conference isn't on every writer's or reader's most important things to do, but most writers, aspiring writer or adoring reader will attend one or more in their lifetime. Choosing which is becoming more difficult when there are more than just one to choose from. Granted, for the lesbian purist, the hot places to be seen are at the Golden Crown Literary Society Conference and Provincetown's Women's Festival Week. The later isn't really a "writing conference" per se, merely a week-long revelry of music, dancing and activities where bookstore readings are attended by new and popular lesbian authors. The Golden Crown Literary Society is an organization dedicated to the study, encouragement and preservation of lesbian literature. A very admirable goal, for sure. Their yearly conference moves around the country and they award the Goldie Awards for lesbian fiction. The GCLS offers a great benefit to authors strapped for cash by offering Scholarships which helps out in conference fees, food, lodging, etc. Before I move on, there is another very popular and worthy conference held in New Orleans each year, Saints and Sinners. It's a high powered conference with popular and new gay and lesbian authors filled with interesting panels and activities dealing with all aspects of gay and lesbian literature.

Which brings me to the economy. With the shrinking budget squeezing every dime and nickel for life's necessities like food, meds, car payments, mortgage, rent, etc., how do you decide if or which conference to attend? Will the economy put a hit on one or more of these conferences?

I invite authors, publishers and readers to comment. There are also other genre conferences that are not gay or lesbian oriented like Fantasy, SF, Romance and Horror conventions. Do you feel you, as a lesbian or gay genre author, can benefit more from attending one of these conventions instead of our beloved gay/lesbian conferences?

I would love to hear your thoughts.
Posted by Patty G. Henderson at 3:16 PM 4 comments: