CAN A SINGLE LINE IGNITE A FULL LENGTH NOVEL?

I got to wondering how many of you, or if any of you, have ever been spurred into a brand new novel by a simple line that worked its magical way into your thoughts and wouldn't leave you alone until you created a story to match its magic? I know this question is directed at authors, but many readers are also interested in the thought process of how a novel comes into being and what motivates authors, so I hope non-authors will find this blog of interest as well.

"There are demons within us all just as surely as there is the goodness of Christ. Love is blind to both..."

That line crept into my imagination and haunted me until I wrote my latest Gothic Historical Romance, PASSION FOR VENGEANCE 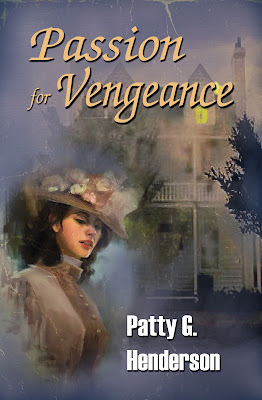 What about you? How many authors have been piqued by a line that crossed their thoughts? Or, is the power of just one line enough to launch a whole story? I believe it is.

And just so you can't call me a "one line wonder," I've just started a brand new Gothic Historical Romance, WHERE EVIL DWELLS. And what was the line that started me off on this one? Well, two, but the one I will share because it is the most powerful....


"I'm afraid I've been romancing death more than anyone of flesh and blood..."

So, another line from my fertile imagination has the power to ignite a novel into existence, even the book cover too! Below is the cover for my newest Gothic Historical Romance work in progress, born of one single line... 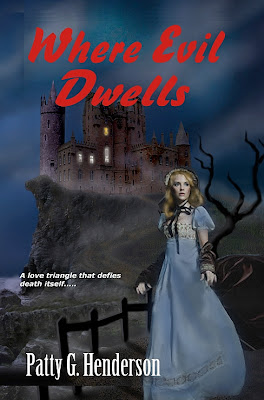 As an author, has a single line, sprung out of nowhere and grabbed your imagination,
spurred a full length novel? I would love to hear your stories.

Leave your comments and share your experiences.
Posted by Patty G. Henderson at 1:15 PM 6 comments:

So, I have indeed been negligent with my own blog. December 2012 came with a blog, the new New Year waved by and Spring came sneaking in without a single new blog. Thank goodness I never set a schedule for blogging.....LOL. I wanted to start on a new blog with the topic of Book Trailers.

For as long as there have been feature films, there have been movie trailers in advance to advertise the film.....to tease the viewer with the most exciting collage of the best and most titillating scenes from the movie. Movie trailers are meant to entice the movie goer into coming to see the feature film when it is released. They are mostly short, quick, and to the point. No excess fat. They obviously work because no film is ever released without a movie trailer in advance. Movie trailers are a staple of movie making.

But what does film have to do with books? The written word. Film is a different beast than the written word....than a book. It's a totally different experience. The visual, candy for the eyes of films, as opposed to the written, words for the brain. But is there really that much difference or just a difference in how we are getting the information to the one place it all goes to anyway--our brain?

Book trailers, or basically movie trailers for books, have been around for some time but considered a relatively new tool in the author's toolkit. But do book trailers work? If you pose that question to any authors group, you are bound to get an equal divide between "Yes" and "No." Being a self-pubbed author, I have the luxury of tracking my sales online at both Amazon and Barnes and Noble daily (hourly for those obsessed with such things). This gives me the ability to somewhat gauge how any promotion tool I use worked or didn't. If I get sales after doing a Guest Blog, an interview or posting a book trailer, I consider it a safe bet that the promotion worked. Those who are contracted authors, unfortunately, aren't so lucky. You don't know your sales so you have no way to know what is working and what isn't on a daily or even monthly basis.

For me, book trailers work. As a matter of fact, they work better than some other tried and true methods. Plus, they are an awful lot of fun to do if you want to do them yourself. You can use Windows Movie Maker to create a simple but effective book trailer. Or, if you have the budget, get one made with all the bells and whistles and special effects. Some detractors point that a book is not a film and book trailers are not true to the written word. I wonder how that is. Don't we use a visual medium, the book cover, to sell and promote our books? The visual is very much a part of the written word. Our words create "visual worlds." The book trailer is merely eye-candy promoting our written words. There is no sin in embracing book trailers to sell books. I would go so far as to say that if your book trailer did not sell even one book, then perhaps the book trailer wasn't produced for maximum effect. Okay, so what is maximum effect? Don't make your book trailer over one minute with excessive text. Today's attention span is very limited. Don't tell your whole story in the book trailer. Use evocative images moving quickly. Include succinct blurbs and text that tease. Make that potential reader want to know more about the book and buy it.


I've included several of my own book trailers. I wanted to include one of my Brenda Strange Supernatural Mysteries book trailer, but it has been lost in a computer crash. Some are done by me and others by a more seasoned professional. None are overly slick but simple for anyone to create.
Posted by Patty G. Henderson at 2:31 PM No comments: